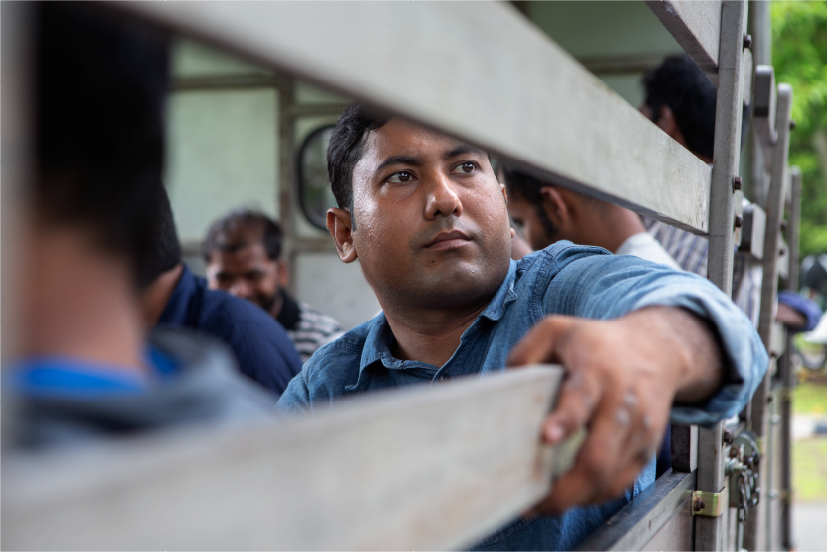 How do you go to work every day?

Some travel by bus to work. Others travel by car. Me? I travel by lorry. My day begins at 4.30am at the crack of dawn. Like everyone else in the dormitory, I get in line and wait for my turn to shower. A quick breakfast follows. After this, the waiting begins. In the still darkness, we wait by the roadside for the lorry to pick us up. We wait again at the next destination to pick up another batch of workers. The actual journey to the construction site is not too long, but the wait is. On the lorry, there are two blessed spots, the seats beside the driver. Where two people get to sit comfortably and enjoy the air-conditioning. Others, including me, are not as lucky. Like a can of sardines, we are squeezed together at the back of the lorry where it is always hot and stuffy. The other workers, regardless of nationality or race, become my comrades-in-arms. When it rains, we huddle closely and shield each other from getting drenched. Sometimes, we sit on one another. In times like this, the smell of our work boots and our sweat become one, making breathing almost toxic. We even risk our lives together. When the lorry brakes unexpectedly, most of us have nothing to hold on to. Once, a comrade got injured and we could only watch in dismay. Finally, the rumbling of the engine stops. And we wait again. 8.00am. Work is about to begin. This is my every day. I accept it because the livelihood of my family back home depends on me. Still, I hope that one day, I will get to travel to work like you.