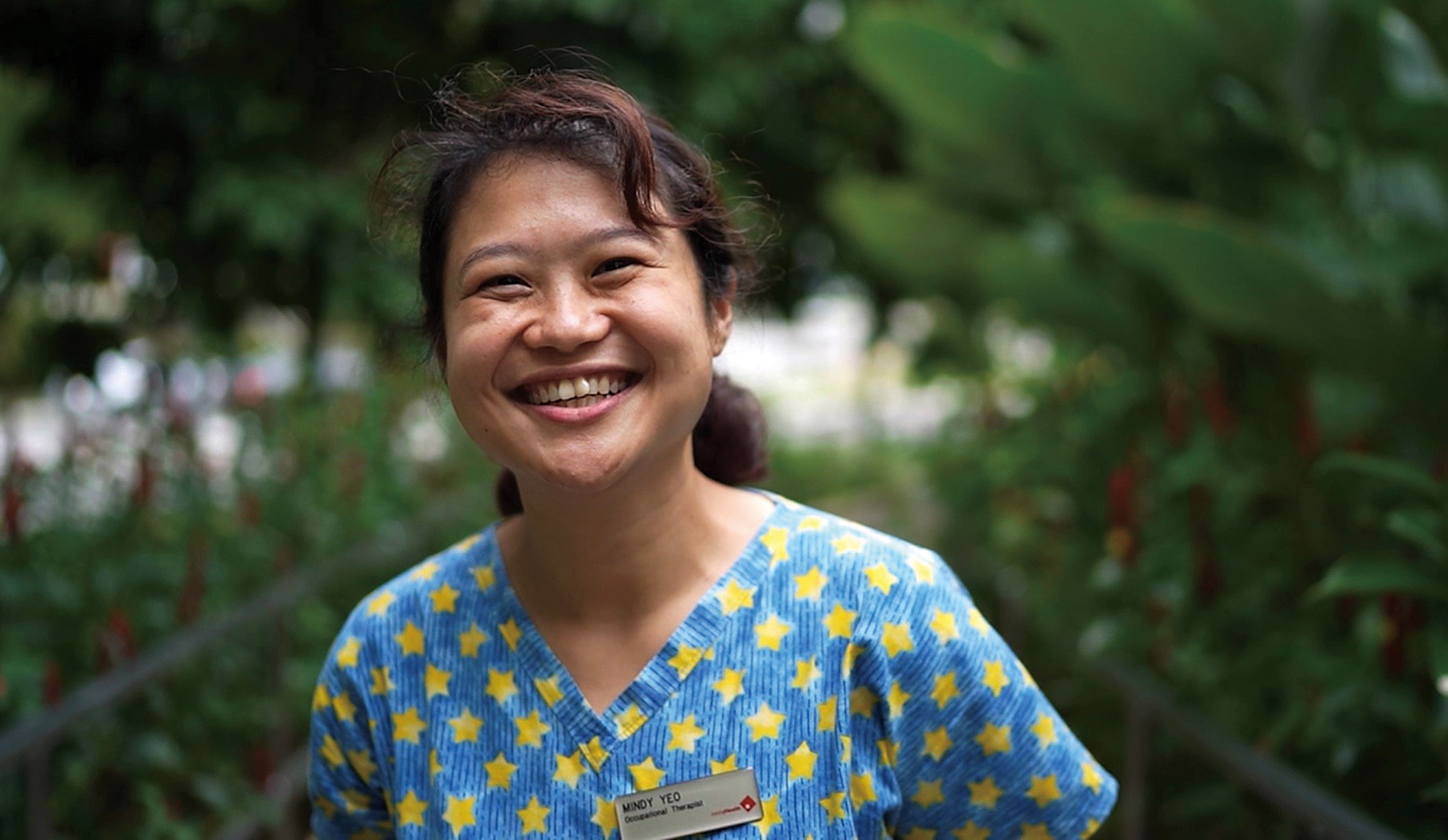 Best of oneself is not based on the power of an individual, but a collective team of selfless and giving people who support one another.

I joined NTFGH as an Occupational Therapist (OT) after a mid-career switch as an administrator, as I enjoy interacting with people. As an OT, I have an immense sense of fulfillment in what I do – being part of the team, working alongside with my patients and their families. The best part of my job is to walk with patients on their road to recovery, helping them regain their quality of life and return to activities they had once enjoyed.

Although I have only been an OT for 3 years, I have met many patients who have left me with a deep impression. One particularly memorable experience I had was with a young foreign worker, Mr Suthakar who was only in his late 30s. He was admitted for a severe stroke which had paralysed his right arm and compromised his speech. This has caused him to lose his job as a driver in a construction firm that he had been working in for 4 years. With this predicament, going home to his loved ones became his only priority. However, with the travel restrictions and suspended flights, returning to India seemed like an almost impossible feat.

Depressed over his situation, Mr Suthakar, whom we addressed fondly as “Brother”, hadn’t been receptive to therapy. Each time when I approached him, he would shake his head and gesture with his hands, signalling me to leave him alone. I was deeply concerned with his progress; hence, I decided to strike a conversation with him. As I had been to India a few years ago, I began to list all the places of interest that I have been to with the help of Google translate. When I mentioned about his hometown, Tiruchirappalli, his face lit up immediately! This opened up my conversation with him and over time, I learnt that he has a wife and a 5-year-old son back home. He was the sole breadwinner and the future seemed bleak for him. Whenever I asked about his family, he would tear up silently. I felt very sorry about his plight.

The first few weeks were tough as Mr Suthakar was frequently moody and tend to focus on his current physical state. To encourage him, I searched for a video of a stroke survivor in Tamil to help him better understand the trajectory of stroke and rehab benefits. Knowing he missed home badly, I encouraged him to follow his therapy regime so that he could see his family sooner. He eventually participated regularly and made good progress in his recovery. I was extremely proud when he could tie his shoe lace and button his shirt single-handedly.

Colleagues around me were also well-aware of Mr Suthakar’s struggles. Many of them reached out to him in their own small ways. For instance, some of the nurses would buy his favourite food - bread and jam, with their own money - to cheer him up. Other nurses would offer Mr Suthakar their personal mobile phones to video call his family whenever he felt homesick. It made their day when they saw him enthusiastically waving to his family back home.

When it was finally time for him to be discharged from the hospital, I decided to bring Mr Suthakar for a local meal at 1983 Cafe with the free meal vouchers given by my Therapy Assistants. Despite the language barrier, I could tell that he really appreciated everyone’s gesture and kept smiling throughout the time we were there.

None of us wanted Mr Suthakar to go back empty-handed to his family, so we bought some souvenirs, such as a brooch for his wife and colouring materials for his son. I also prepared a bag of clothes, hand sanitizers and face masks for him. I really hope that he could continue his therapy back home and find a job soon.

Since the outbreak, it had made me reflect on how little I know about a migrant worker’s predicament. In my own little way, I hope that I have given Mr Suthakar some happiness while he was here with us and that he left us with a good impression of Singapore.

I believe that the best of oneself is not based on the power of an individual, but a collective team of selfless and giving people who support one another. I am proud that the therapists and the nurses have stepped up and taken on the role of the community in caring and supporting migrant workers like Mr Suthakar in their times of need.

Known as the JurongHealth Campus, NTFGH and JCH are Singapore’s first integrated healthcare development designed and built together from the ground up. Designed around the patients’ needs, the twin development enables NTFGH patients who no longer require acute care to be easily transferred to rehabilitate and recuperate in JCH. Both hospitals are also managed by one healthcare team to facilitate integration at all levels to enable better patient care, greater efficiency and convenience. NTFGH is also the first in Singapore and ASEAN to attain HIMSS EMRAM Stage 7, with JCH at HiMSS EMRAM Stage 6 – an achievement which recognises hospitals with the highest level of adoption and utilisation of electronic medical record functions.

As part of an integrated academic health system, NTFGH and JCH, in collaboration with partners in the healthcare continuum, aims to transform healthcare to deliver holistic and seamless patient-centred care.

Delivering ‘Incredible care and health, together!’