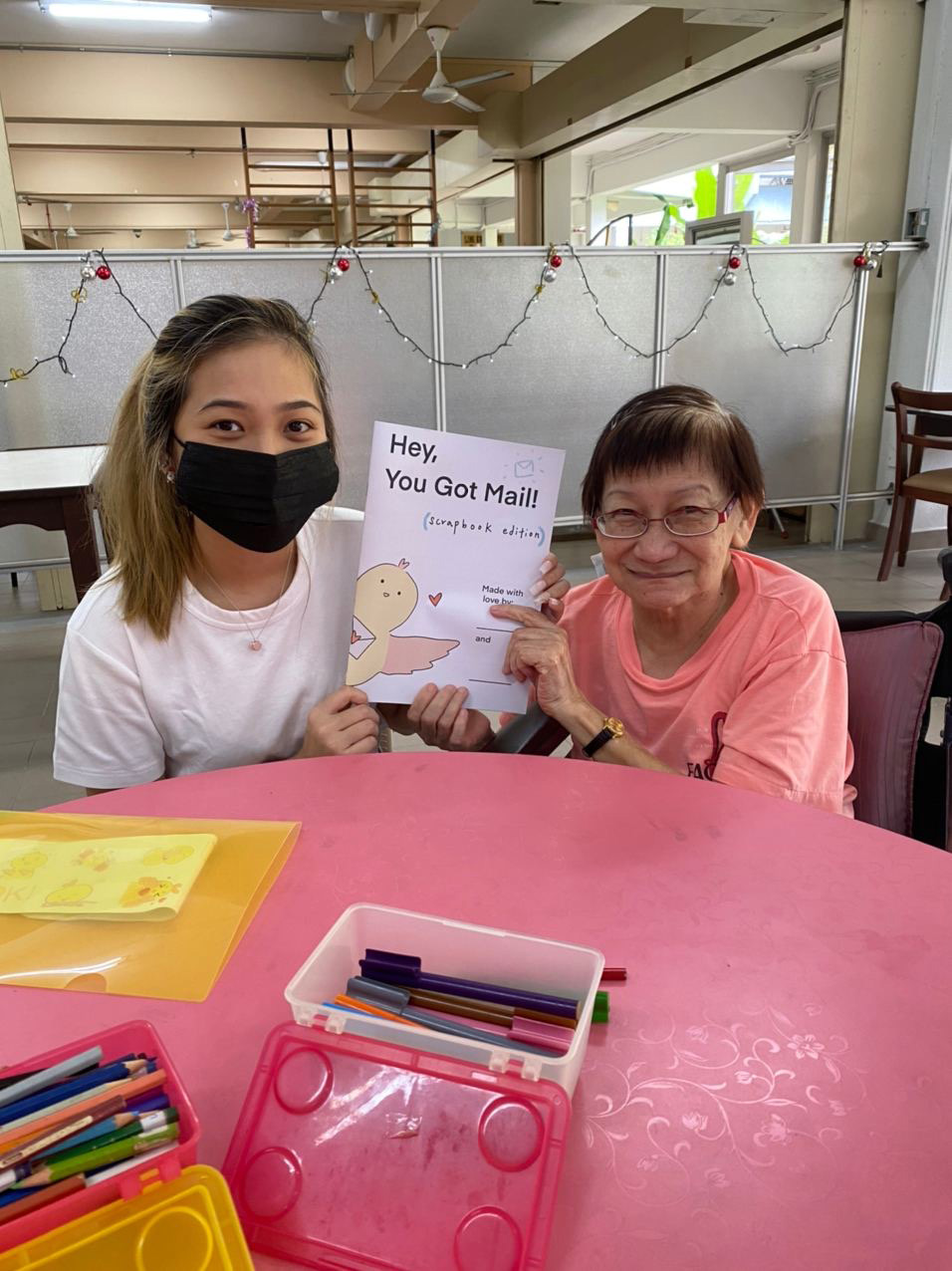 Hey, You Got Mail! : My Journey In Bridging The Gap Between The Elderly and Youths

Hey, You Got Mail: Scrapbook Edition (HYGM:SE) is a side project of Hey, You Got Mail (HYGM) that aims to promote and foster stronger, long-term interactions with the elderly. Beyond the distribution of cards, Scrapbook Edition focuses on face-to-face interactions with the elderly, whereby a volunteer and an elderly will co-share one scrapbook and complete engaging activities while personalising the scrapbook to pen down those memories. The scrapbook is completed over four hourly face-to-face sessions.

What inspired me to start this initiative was that everytime I wrote messages down on the HYGM cards to be sent out to the elderly, I felt like I was writing to nobody. There was no face to the name and the messages I wrote down didn’t feel personal to whomever I was writing to you. Scrapbook Edition allows us to actually sit down with the elderly and interact with them on a more personal level, that is more than just writing cards and sending it to them - with no interaction or knowledge of the recipient at all.

After being in the HYGM team for several months, HYGM feels like family to me.. With the amount of times that our team has met up on weekends, to zoom meetings, I have definitely formed a sense of attachment to them. Beyond the team, interacting with the elderly and conversing with them makes me feel as though I'm their grandchildren and every scrapbooking session that I come down to feels like home.

One big challenge that we faced throughout this project was trying to deal with the uncertainty of the elderly and volunteer pairings. We can only pre-empt our volunteers of how to interact with the elderly, but as with anyone, they can be unpredictable at times. There were several instances where the elderly did not want to talk during the entire session and it was definitely hard on the volunteers as they tried to engage the elderly. However, after a few sessions, the elderly get more comfortable with the volunteer and this awkwardness soon fades away. After all, they love to talk about their childhood and having the volunteers there to hear their amazing stories is perfect for them.

Despite all the challenges, there were definitely some memorable encounters, and one would be when our volunteers  willingly come down to meet their attached elderly beyond the 4 sessions allocated to them. I remember an instance where a volunteer messaged me that she would be coming down to the nursing home to celebrate her attached elderly’s birthday. The fact that these volunteers are willing to come down beyond the allocated sessions tells me that the interactions have been so well formed with their elderly that they don’t mind coming down on their own accord. Small things like these just remind me that our initiative is working in forming those long term connections, and is not simply a one-off thing.

I feel that people can help our initiative by spreading the word of HYGM! Right now because of the phase 2 restrictions, scrapbooking sessions have been put on hold, but our regular card delivering initiative still stays on. Spread the word of HYGM and even purchase a card to send to nursing homes or to your loved ones, adn HYGM will match that purchase to send a card to nursing homes as well! For those who have a strong passion for causes like these, don’t be afraid to step up! You can start by finding individuals who share the same passion as you and form a group where all of you can work on it together!  Teamwork makes the dreamwork and us, the HYGM team have definitely made our dream work.

More about Hey, You Got Mail!

The battle against social isolation, in the case of this project, cannot be fought on individual fronts. And so, creating opportunities and empowering individuals have become a keystone to Hey, You Got Mail! If supporting the elderly in Singapore speaks to you, follow us on Instagram @heyyougotmailsg and head on over to our website at heyyougotmail.com and see how you can contribute!

Join us and let’s become a part of the solution together.